Land Use: A Group Exhibition 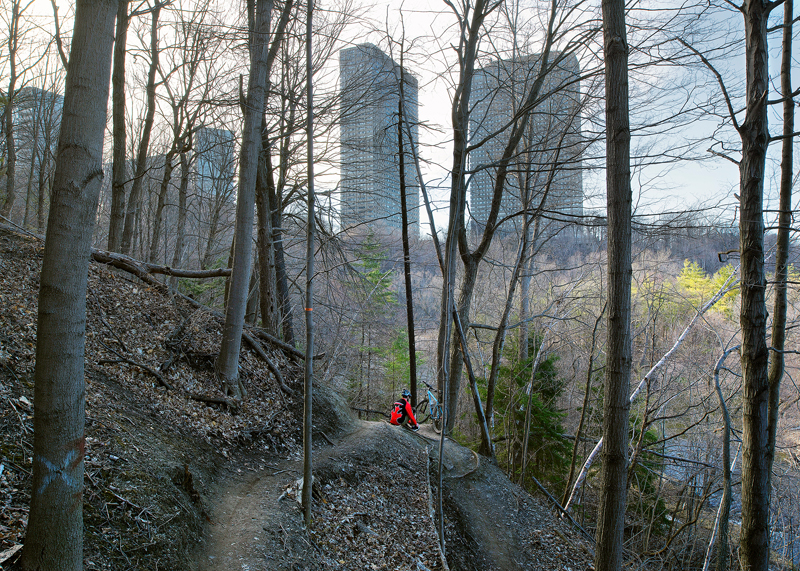 Much of human activity is spent either glorifying or mastering our natural surroundings. Whether nurturing a garden into harmony with a built environment, or finding a natural oasis within a large city, people’s interaction with nature is constantly evolving. This exhibition combines the work of four artists whose projects each explore a particular connection with nature.

Geoffrey James has spent five decades surveying the natural and urban landscape, and in the 1970s was renowned for his series of black and white photographs of European gardens, made using a rudimentary panorama camera and presented as contact prints. Since that time, James has utilized a variety of cameras to capture human activity in the landscape. A selections of his work from three separate series are shown opposite selections of Robert Burley’s colour photographs taken from his thorough study of Toronto’s expansive park system. The verdant scenes of James’ and Burley’s photographs are in stark contrast to those of Jamey Stillings and Dana Fritz, whose projects both explore innovative scientific projects in the desert regions of the American Southwest. Stillings’ finely detailed black and white photographs are from his series “The Evolution of Ivanpah Solar”, which are fascinating images of a colossal project developed across a parcel of land too barren for much else. Fritz’s series “Terraria Gigantica” explores the artificial biomes used for entertainment, as science centres, and whose existence can be seen to herald the third stage of the Anthropocene.

Robert Burley has sought to describe and interpret the built environment in which he lives. His work often explores the transition between city and country through projects such as “ORD: O’Hare Airﬁeld”, “Viewing Olmsted”, “Great Lakes” and “An Enduring Wilderness.” He has also photographed urban spaces and structures through commissioned and self-directed projects that include: “Disappearance of Darkness”, “The New Suburb”, “Instruments of Faith”, “House/Home”, and “The Places of Glenn Gould”.

Dana Fritz investigates the ways we shape and represent the natural world in cultivated and constructed landscapes. She is a Professor in the School of Art, Art History & Design at the University of Nebraska-Lincoln. Fritz’s work has been exhibited in over 60 venues in the last decade and is included in collections around the world.

Geoffrey James was born in Wales in 1942, read Modern History at Wadham College, completed his BA and MA at Oxford and emigrated to Canada in 1966. A self-taught photographer, he is the author or subject of more than a dozen books and monographs and is represented in major collections internationally. He lives in Toronto, where he has been named the city’s first Photo Laureate.

A passionate interest and curiosity about world cultures, technology, and the environment are guiding forces in Jamey Stilling’s photography and life. In both assignment and personal project work he draws on a diverse range of photographic skills and over thirty years of national and international experience. From shooting documentary work to creating highly produced conceptual imagery, Stillings strives for well-executed productions, paired with an approach that is open to both the planned and the unexpected.