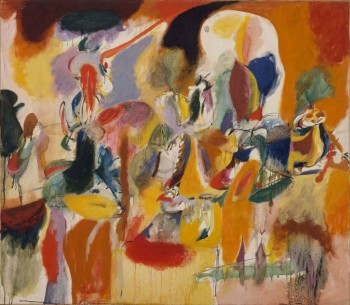 Exploring an unparalleled period in American art, this long awaited exhibition reveals the full breadth of a movement that will forever be associated with the boundless creative energy of 1950s New York.

In the era of free jazz and the Beat Generation, artists like Jackson Pollock, Mark Rothko and Willem de Kooning broke from accepted conventions to unleash a new confidence in painting.

Often monumental in scale, their works are at times intense, spontaneous and deeply expressive. At others they are more contemplative, presenting large fields of intense colour that border on the sublime. These radical creations redefined the nature of painting, and were intended not simply to be admired from a distance but as two-way encounters between artist and viewer.

It was a watershed moment in the evolution of 20th-century art, second only to Cubism in its seismic effect on all that came after it. Yet, remarkably, there has been no major survey of the movement since 1959.

This autumn we bring together some of the most celebrated art of the past century, offering the chance to experience the powerful collective impact of Pollock, Rothko, Still, de Kooning, Newman, Kline, Smith and Gorky as their works dominate our galleries with their scale and vitality.

We will also place a well-deserved spotlight on lesser known figures – amongst them some of the talented women artists who struggled for acceptance within the movement in its heyday. Finally, we will include photography and sculpture to complete an ambitious re-evaluation of the phenomenon that turned New York into the world capital of art.

The exhibition will be curated by the independent art historian Dr David Anfam, alongside Edith Devaney, Contemporary Curator at the Royal Academy of Arts. Dr Anfam is the preeminent authority on Abstract Expressionism, the author of the catalogue raisonné of Mark Rothko’s paintings and Senior Consulting Curator at the Clyfford Still Museum, Denver.