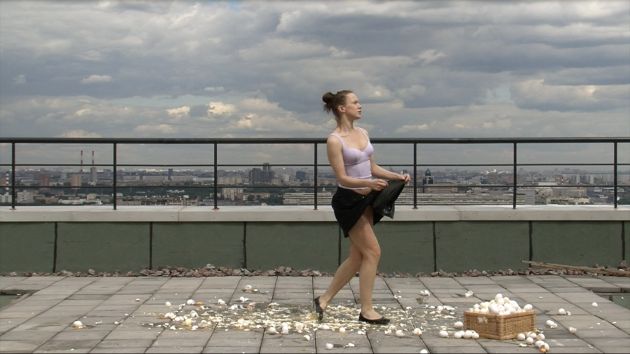 Polina Kanis (born 1985 in Leningrad, now Saint Petersburg) reconsiders the boundaries between film, photography and performance. Her videos are marked by a distinct tension between the scenario they depict and the world that lies beyond the frame. Kanis’ protagonists inhabit closed systems within which their behavior is reduced to automatized and ritualized actions by an invisible instance of authority. These microcosmic settings explore how a given framework – be it social, political, or cultural – can influence and distort its subjects, bringing about shifts and perversions in the relationships between them in an attempt to find one’s position within the collective.
+
Polina Kanis graduated from the Rodchenko Art School, Moscow, in 2011, the same year in which she was awarded the Kandinsky Prize in the category Best Young Artist for her video “Eggs” (2010). In 2016 Kanis received the Sergey Kuryokhin Award in the category Media Object for her film “The Pool” (2015). Her work has been featured in numerous solo and group exhibitions, including the parallel program of Manifesta 10, and the 2015 edition of the Ural Industrial Biennial of Contemporary Art. As of January 2017 Kanis is part of the residency program at the Rijksakademie van beeldende kunsten in Amsterdam.