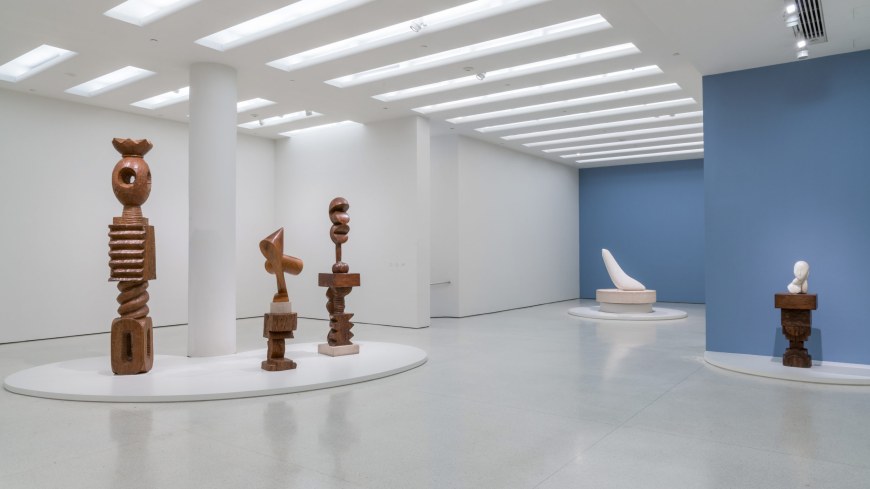 In gallery space devoted to the permanent collection, the Guggenheim is showcasing its rich holdings of the work of Constantin Brancusi (1876–1957). In the early decades of the twentieth century, Brancusi produced an innovative body of work that altered the trajectory of modern sculpture. During this period, Brancusi lived and worked in Paris, then a thriving artistic center where many modernist tenets were being developed and debated. He became an integral part of these conversations both through his relationships with other artists, such as Marcel Duchamp, Fernand Léger, Amedeo Modigliani, and Henri Rousseau, and through his own pioneering work. His aspiration to express the essence of his subjects through simplified forms and his engagement with non–Western European artistic traditions led to new stylistic approaches. In addition, his mode of presentation, which equally emphasized sculpture and base and in which works were shown in direct relation to one another, instead of as independent entities, introduced new ways of thinking about the nature of the art object.

The Solomon R. Guggenheim Museum began collecting Brancusi’s work in-depth in the mid-1950s under the leadership of its second director, James Johnson Sweeney. When Sweeney began his tenure at the museum, the collection was focused on nonobjective painting. Sweeney significantly expanded the scope of the institution’s holdings, bringing in other styles and mediums, particularly sculpture. The Guggenheim’s commitment to Brancusi during these years extended beyond its collecting priorities, and in 1955 the museum held the first major exhibition of the artist’s work.