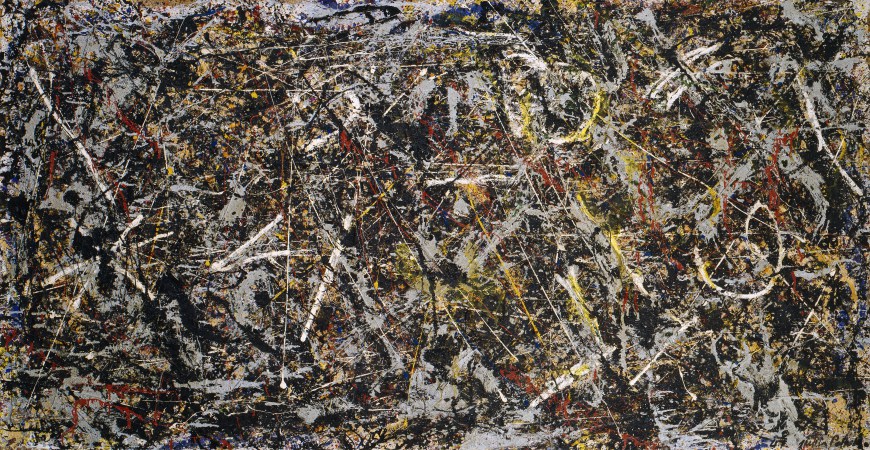 Jackson Pollock’s Alchemy (1947), a celebrated icon of postwar abstraction that Peggy Guggenheim acquired through her financial support of the artist, is on view for the first time in the United States since 1969. A team of conservators from the Guggenheim and Italian organizations has completed scientific analysis and treatment of the painting in Florence. In the Sackler Center for Arts Education, video footage and interactive kiosks display three-dimensional imaging, elemental mapping, x-radiography, and non-destructive analytical techniques to identify the painting’s pigments and binders. This didactic exhibition on one of Pollock’s earliest poured paintings draws visitors into the world of an art conservator, allowing them to comprehend the physical properties of the materials the artist used to create Alchemy and how he applied them to the canvas.

The story of Alchemy is inseparable from Peggy Guggenheim, whose patronage throughout Pollock’s brief yet brilliant career significantly contributed to the history of postwar American art. She virtually discovered the artist with her series of one-man shows at Art of This Century, her influential museum/gallery on New York’s Fifty-Seventh Street. Guggenheim was captivated by Pollock’s raw talent, and she devoted considerable energy to promoting and selling his work. After first including the artist in a series of group exhibitions during the museum/gallery’s first season (1942–43), Guggenheim offered Pollock a solo exhibition and commissioned from him a 20-foot-long mural for the vestibule of her East Sixty–First Street duplex. She also provided Pollock with a monthly stipend—the only artist she would support financially in a long-term arrangement. This unprecedented level of assistance for an emerging artist permitted Pollock to quit his job as custodian at the Museum of Non-Objective Painting (later to become the Solomon R. Guggenheim Museum) to devote himself entirely to painting. For the next five years, Peggy Guggenheim subsidized Pollock, which in turn allowed her to acquire significant holdings of his art.
Pollock was given three more solo exhibitions at Art of This Century before it closed in May 1947. Following this, Guggenheim returned permanently to Europe where, once settled in Venice, her integral role in establishing his career continued. She introduced his work to a European audience at the 1948 Venice Biennale and organized his first European exhibition, at the Museo Correr in Piazza San arco, Venice, during the summer of 1950. She consolidated the artist’s reputation through the donations of paintings to leading museums from Tel Aviv to San Francisco. Today, the Peggy Guggenheim Collection houses the largest collection of Pollock works assembled in Europe. Alchemy is the undisputed masterpiece of those works Guggenheim chose to keep for Venice. Pollock was, as Guggenheim readily acknowledged, the most important artist in her life, and her “most honorable achievement.” He in turn owed much to her, as one of the first to believe in his genius.