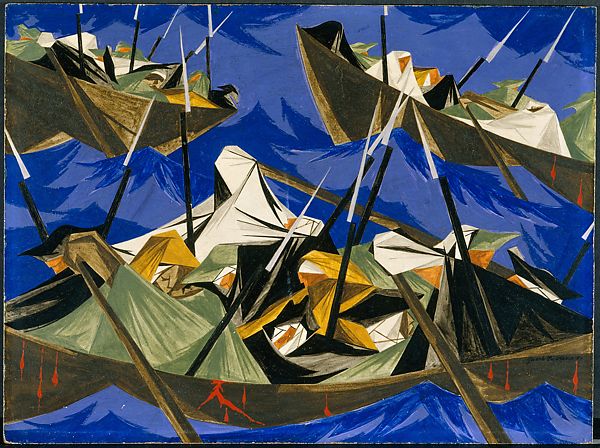 Jacob Lawrence: The American Struggle will feature the little-seen series of paintings—”Struggle . . . From the History of the American People” (1954–56)—by the iconic American modernist. The exhibition will reunite the multi-paneled work for the first time in more than half a century.

Lawrence’s “Struggle” was originally conceived as a series of sixty 12-by-16-inch tempera-on-board paintings, spanning subjects from the American Revolution to World War I. It was intended to depict, in the artist’s words, “the struggles of a people to create a nation and their attempt to build a democracy.” Lawrence planned to publish his ambitious project in book form. In the end, he completed thirty panels representing historical moments from 1775 through 1817—from Patrick Henry to Westward Expansion.

The finished works are titled rhetorically, attributed with quotations that emphasize America’s early fight for independence and expansionism, as well as oft-overlooked contributions of women and people of color. This more inclusive representation of the nation’s past is no less relevant today, and Lawrence’s prescient visual reckoning with American history remains profoundly resonant with ongoing issues and debates regarding race and national identity.