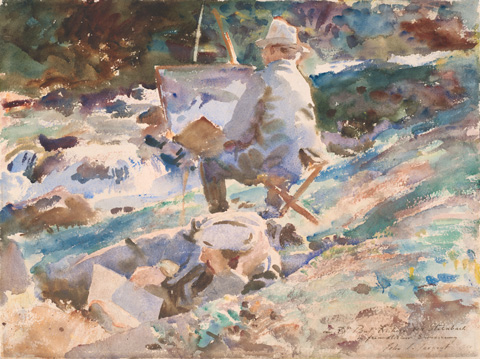 John Singer Sargent (1856–1925) was the most sought-after portraitist of his generation on both sides of the Atlantic, creating powerful, vibrant likenesses of his sitters. Best known for his portraits, Sargent nevertheless excelled in a variety of genres, including landscapes, watercolors, and murals. Born in Florence to American parents, he lived his life abroad, traveling the world in search of his subjects and working professionally for more than 50 years. A truly cosmopolitan artist, Sargent’s Chicago story has yet to be told. The first major exhibition of the painter’s work at the museum in over 30 years, John Singer Sargent and Chicago’s Gilded Age presents the full range of Sargent’s talents, tracing his Chicago connections while also illuminating the city’s vibrant art scene at the turn of the 20th century.

Sargent first showed at the Art Institute—at the time located at Michigan Avenue and Van Buren Street—in 1890, the year Chicago officially became the nation’s “second city” in terms of population. Among his paintings on view was La Carmencita, a striking portrait of a Spanish dancer that is at once old and new—a tribute to Old Master painting that is also an Impressionist exploration of color and brushwork. The composition drew crowds of visitors to the museum, helping to put Chicago on the map as a recognized center for contemporary art and culture.

This dramatic early showing was followed by many more Chicago exhibitions. Between 1888 and 1925, Sargent’s paintings were included in more than 20 public displays in the city, among them the Inter-State Industrial Exposition, the World’s Columbian Exposition, exhibitions at the Arts Club of Chicago, and the Art Institute’s American Annuals. The artist’s presence in Chicago owed much to local businessman Charles Deering, who built an important collection of his work over a lifetime of friendship. Other Art Institute supporters such as Martin A. Ryerson, Annie Swan Coburn, and Robert Allerton helped establish a Sargent legacy for the city.

Featuring approximately 100 objects from the Art Institute’s collection, private collections, and public institutions, John Singer Sargent and Chicago’s Gilded Age examines Sargent’s impressive breadth of artistic accomplishment and the many connections between the artist, his patrons, his creative circle, and the city. In so doing, the exhibition opens up rich narratives about Chicago’s cultural ambitions, the development of a national art, and the interplay of traditionalism and modernism at the turn of the 20th century.