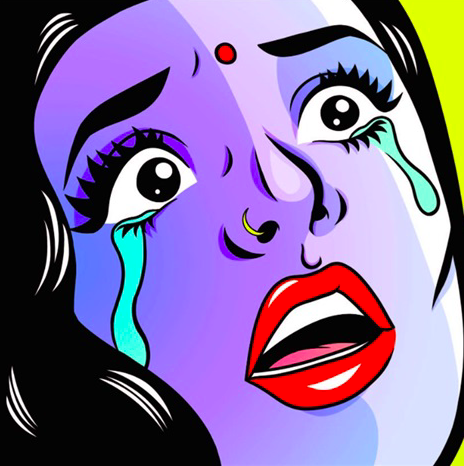 Richard Taittinger Gallery is pleased to present Desi-Pop artist Maria Qamarfor her first solo show in New York City. Qamar’s start in the art world began largely through Instagram where she cultivated a devout group of over 166k followers, including art critic Roberta Smith, Mindy Kaling and the New York Times, with her Instagram handle @hatecopy. With our summer show, Fraaaandship!, Richard Taittinger Gallery is working to bring this online Instagram community to the physical art world providing a gallery experience to many art lovers who are more familiar with viewing art through their screens. This relationship with a social media star serves to disrupt our white wall space and draw it into the new world of online art communities creating a more open and accessible space.

This series of Qamar’s work deals specifically with the realities of online interaction from a strong feminist perspective. Online communication, social media, and a sense of personal branding have changed, or at least complicated, the concept of friendship. She questions a further distortion of the term into “fraaaandship.” In the Desi community, the use of the term “fraaaandship” on social media and communications apps such as Instagram, Whatsapp, and Facebook, takes on a sexual, and potentially shady connotation. Offers of “fraaaandship” often come totally unsolicited and are unwanted.

Despite this distortion of friendship by some (usually men) online, the idea of reaching out for genuine friendship and connection is important to Qamar. In this dynamic and interactive exhibition Qamar invites visitors to come in as friends. To laugh about the absurdity of “fraaaandship,” but also to engage with it critically. Her samosa bean bag chairs and Maggi Noodle balloons invite viewers to sit and touch. This creates a friendlier interactive exhibition in contrast to sterile, quiet, traditional gallery experience. Her signature esthetic is at the heart of this exhibition and it invokes the social media friendships, and connections she had made with her Instagram @hatecopy, over the past few years.

Qamar’s large and colorful paintings have a rebellious and defiant spirit. Inspiration from pop-artists such as Roy Lichtenstein, Andy Warhol, and Marjorie Strider is evident. Her work Bad Influence, for example, has a comical and ironic element. The speaking figure accuses the viewer while simultaneously smoking a cigarette and protecting her son who is also smoking. There is a hypocrisy in this image; a refusal to see one’s own faults while readily accusing another, specifically another girl. Qamar’s paintings refuse to conform to the rules and norms of Desi culture, particularly South Asian gender norms. They also push back against normative white western hegemonic culture. Qamar’s refusal to translate certain Hindi and Hindi slang words, for example, works to ensure that her work is rooted firmly in her own worldview. Her use of language, color, and South Asian esthetic components make it clear that her work won’t be whitewashed or diluted.