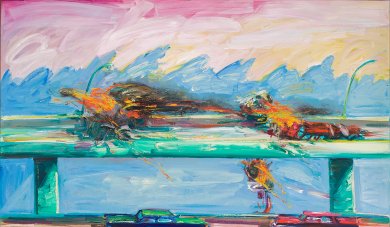 Playing with Fire: Paintings by Carlos Almaraz is the first major retrospective of one of the most influential Los Angeles artists of the 1970s and 1980s. Arguably the first of the many Chicano artists whose artistic, cultural, and political motivations catalyzed the Chicano art movement in the 1970s, Almaraz began his career with political works for the farm workers’ causa and co-founded the important artist collective Los Four. Although he saw himself as a cultural activist, Almaraz straddled multiple—and often contradictory—identities that drew from divergent cultures and mores, and his art became less political in focus and more personal, psychological, dreamlike, even mythic and mystical as he evolved artistically.

The first to focus predominantly on Almaraz’s large-scale paintings, the exhibition features more than 60 works and includes pastels, ephemera, and notebooks, mostly from 1967 through 1989, the year of the artist’s untimely death at age 48.