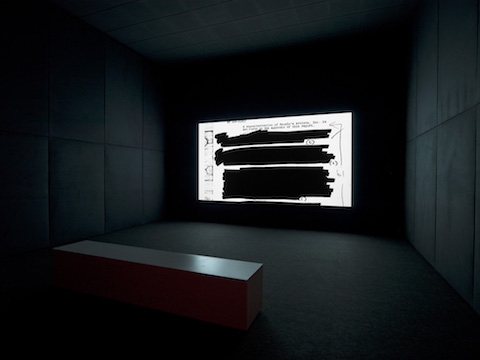 Over the last 25 years, Steve McQueen has earned a reputation as one of the most important and influential artists of his generation, making film and video installations designed for gallery-based presentation as well as feature films for cinematic release. Whether they emerge from a seemingly journalistic impulse or remain more abstract, shaped instead by allegory or metaphor, most of McQueen’s works exhibit a potent, at times oblique, political consciousness.

End Credits, Part 1, which debuted at the Art Institute’s internationally acclaimed 2012 exhibition Steve McQueen, evidences a definitive political engagement. Inspired by the life of the legendary African American singer and social crusader Paul Robeson (1898–1976), McQueen structured the piece to mimic the conclusion of every feature film: the rolling credits. Here, however, the backstory becomes the narrative itself. Beginning in the 1920s, Robeson pursued his lifelong artistic and intellectual activities, performing in concerts, plays, and films, and by the 1930s, he was traveling extensively throughout Europe and the United States, writing and speaking on social and political issues. When World War II broke out in Europe,
Robeson returned to the U.S. and joined the fight against fascism abroad and racism at home, becoming a national hero hailed by black and white Americans alike. Together with W. E. B. DuBois and Albert Einstein, Robeson organized the National Crusade to End Lynching in 1946. Blacklisted in the 1950s, he ended his social justice work, and his career as a performer was all but destroyed. FBI documents obtained by McQueen through the Freedom of Information Act reveal that United States surveillance agencies had begun investigating Robeson as early as 1941. This scrutiny continued throughout the rest of his life, with crippling effects. In poor health, he spent his final decade in seclusion in New York and Philadelphia.

In End Credits, McQueen reproduces every document—thousands and thousands of pages—in Robeson’s recently declassified, although still heavily redacted, FBI files. The result is an exercise in duration: nearly 13 hours of “footage” combined with a 19-hour spoken-word soundtrack. The discrepancy between the visual and audio components creates a predictable but asymmetrical loop.