As I See It with Bruce Helander – Joseph Conrad-Ferm – Momentum

As a professional artist and critic as well as a curator, I have many advantages for which I thank my lucky stars every day. The great benefit of dividing my time between the studio, art galleries and museums is that eventually I developed a sharper perspective on the art world while cultivating a critical eye for the huge amount of works that regularly come to my attention. The more you look the more you learn, and the more comfortable and secure you become in making significant judgments as well as mastering the technique of articulating your opinions into a cohesive statement, which also may incorporate a bit of related art history along with expressing what makes certain works “tick” while others seem to fail.

In fact, most art critics will tell you that often it is a genuine challenge to find new work that is compelling and inventive, even if it is a new interpretation of an existing genre, from cubism to abstract expressionism. When I first saw the fresh paintings of Joseph Conrad-Ferm on exhibit at the Paul Fisher Gallery, I immediately was impressed with his freewheeling, risk-taking talent that was quite obvious, and with his unmistakable visual footprint that was unlike anything I had seen in many years, I knew I had made a compelling discovery. I soon learned that Conrad-Ferm is a self-taught artist, who was encouraged by experimentation and a fearless approach to creating disparate marks complemented by vertical and horizontal lines, splashes of raw color and random acts of visual kindness in the form of sweet little painterly areas that are at once rough and smooth, providing a kind of off-balancing act where lines and forms compete with each other to hold the composition together. I also found out that renowned collector Beth DeWoody, who has a knack for discerning new and original artists, had begun acquiring Conrad-Ferm’s work, a sure sign of his future success.

Joseph Conrad-Ferm, whose survey exhibition opened this month at the Coral Springs Museum of Art (through August 27), has an evident gift for exploring the far corners of an initially blank canvas, and, starting with a brushstroke like the warm-up habits of de Kooning or Kline, he begins to “build” a picture by intuitively sensing which forms will attract each other and mesh, while others spin away in an opposite direction, leaving a scratchy haze as if from a distant comet streaking across the night sky. As the white background begins to fill up with expressive brushstrokes and an occasional scrape by a large palette knife, there is a noticeable energy that begins to stir, as if the shapes were communicating in a post-modern language all their own that is not only genuine, but able to repeat segments and “sentences” in other works that are part of the series on view. There is a very strong common denominator throughout this innovative collection, which is recognizable instantly, and taken together the handmade energy collaborates with each companion work to form a pictorial bond that is undeniable.

Another appealing and memorable aspect of Conrad-Ferm’s orchestrated, line dancing party is the intentional rhythm and poetic streaks he seems to enjoy nourishing with a demonstrated segment of non-narrative painterly spaces. In the same way that Christopher Wool produces intuitive space on his canvas by whipping away sections of paint to expose ghostly images beneath, Conrad-Ferm has a natural ability to wipe away certain spots to generate depth and often offer a new base on which to reconstruct shapes and gestures that function well.
The opportunity to view these early works at the Coral Springs Museum of Art is indeed a surprising experience, where a new and completely novel approach to painting with an abstract expressionist foundation is revealed. What’s so exciting to me as the curator of this exhibition is that if you can be this good this young, just wait until this artist shifts into high gear and the polished formula and instinctive painterly approach blossom into a recognizable and completely unique form of contemporary picture-making.

For more information on Joseph Conrad-Ferm at the Coral Springs Museum of Art: http://coralspringsmuseum.org/joseph-conrad-ferm/ and on the artist: http://www.paulfishergallery.com/ 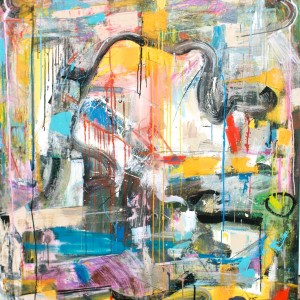 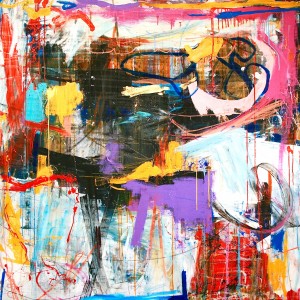 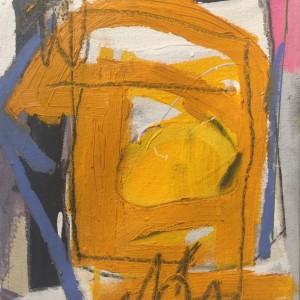 Bruce Helander is an artist who writes on art. He received BFA and MFA from the Rhode Island School of Design, where later he became the Provost and Vice President for Academic Affairs. He is a former White House Fellow of the National Endowment for the Arts, and recently was inducted into the Florida Artists Hall of Fame. Helander currently is exhibiting his work at Tansey Contemporary in Santa Fe with a solo show titled “Rodeo Rider & Other Wild Pictures.”