For much of the country, the winter months are just something people put up with, as there is little hope of warm weather during that season. As a boy growing up in Minnesota, I experienced a climate that reminds me of the TV programs “Life Below Zero” and “Deadly Catch,” where the floating, freezing cast is thrown about in miserable storms, with bone chilling rain and no end in sight. When my family moved to rural Minnesota, I remember wondering out loud in the autumn why so many people were surrounding their houses with bales of hay up to the roof line, until it dawned on us that it was another layer of necessary protection from a cold wave guaranteed to descend on the state by November and stay put until May. Surreal as this may sound to my South Florida readers, my sister and brother would wait with me by our front door, bundled up to the max, as we listened to the school bus changing gears as it crawled up the hill towards our house. If you plan to go out early in the morning when it’s 30 below zero (or colder), you better dash in a flash, and that’s exactly what we did as the bus driver shifted between second and third gears, arriving next to the mailbox on the road as the bus opened its doors.

You would think I had learned my lesson about living in a cold climate when it became time to choose a college, but contrary to warmer alternatives, I decided to attend the Rhode Island School of Design in Providence, which, of course, is in New England and can brutal in the winter months. While I was in graduate school there, a blizzard came through right at the afternoon rush hour. The storm closed I-95 for twelve days, with no city streets passable and most businesses closed. Dale Chihuly and I hiked to a small grocery store miles away for provisions, and carried our groceries home in a big garbage bag that we dragged along on the frozen ice.

So when I first got a call a few years later to manage an art gallery on Worth Avenue in Palm Beach, I jumped at the opportunity, figuring it would be fun in the sun for a few years and I could finally have a studio with the doors open as I worked into the night. I’m still here thirty-five years later, and now that the spring has arrived and the coast is clear, ironically, I’m off to New York as an exhibitor in Art New York, as well as delivering several lectures. I understand that after a challenging winter the tulips have sprouted on Park Avenue and the bees, they are a-buzzing.

The real buzz in Manhattan these days is the abundance of art connected activities that are concentrated in early May, from the celebrated Frieze art fair on Randall’s Island to the mighty Art New York and CONTEXT New York at Pier 94 on the West Side. Not to mention the new, improved Whitney Museum of American Art on Gansevoort Street, downtown design by Renzo Piano, which is a magical showplace to visit, especially for the first time. Not far away the neighborhood called Chelsea, the largest concentration of commercial galleries in America. Below that is SoHo (South of Houston) and Tribeca (triangle below Canal Street), home to thousands of artists and art dealers that survive by a magnetic strength of numbers. The new neighborhood that’s getting all the attention is the Lower East Side, especially an area called NoLita, whose epicenter is on Prince Street and Bowery. Gone are the blocks of restaurant equipment out on the sidewalks, replaced by snappy little art galleries that are experiencing a huge draw. The New Museum is right in the center of attention in this vicinity as well, and when their new location finally was unveiled, the ripple effect changed the dynamics of this decrepit spot nearly overnight.

Manhattan is a pedestrian’s town, and now that the meteorological conditions are absolutely ideal, it’s great to stroll around the Museum of Modern Art’s outdoor sculpture garden, and then head uptown along Fifth Avenue towards The Met, where if you have the energy, you can go all the way to their roof to see British artist Cornelia Parker’s newly installed and re-created “Psycho” house, a replica of the home made famous in the Hitchcock movie; Parker also was inspired by the artist Edward Hopper. If you walk another ten blocks under the shade trees of Central Park, you will find yourself in front of Frank Lloyd Wright’s masterpiece, the Guggenheim, where Maurizio Cattelan has installed a solid gold toilet that becomes an artwork only with someone sitting on it or standing over it while answering nature’s call. This artwork is nothing to poo-poo, as Cattelan is following a modern version of the first “readymade” by Marcel Duchamp, signed “R.Mutt.” While you a hiking Uptown, you will no doubt enjoy exploring 57th Street, which as some of the best galleries in New York, such as Marlborough, or Madison Avenue on the Upper East Side (my old haunt on 69th and Lexington), where Gagosian has his headquarters in between some of the finest stores in the city.

So if you are reading this in North Dakota or Maine, you may want to venture outside as June approaches and get on the bus, Gus, to the big Apple, the cultural crossroads of America. If you reside in South Florida, which is my nest, please be assured that you may find similar pleasant weather in Manhattan and that you will not have to pack a parka, gloves and a pair of insulated boots.

The month of May, for all the above reasons above, is the ideal time to get an eyeful and then some of the most innovative work being created by some of the best and most interesting artists in the world, and plenty of them. In the 1940s, the epicenter of the art world shifted to New York from Paris with the advent of the “New York School” and the gang of abstract expressionists like de Kooning and Pollock, and it still is. This is a friendly reminder that it’s time to visit and enjoy America’s most exciting city. Oh, and by the way, the next time you may want to visit Brooklyn, which is even more full of surprises. It’s now the biggest collection of artists in the metropolitan area, and one hot spot, now gentrified, is called DUMBO, which stands for Down Under the Manhattan Bridge Overpass. 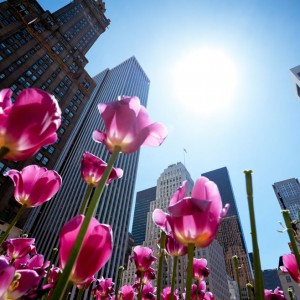 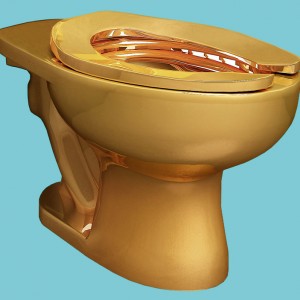 —Bruce Helander is an artist who writes on art. He is a former White House Fellow of the National Endowment for the Arts, the former Editor-in-Chief of The Art Economist, and recently was inducted of the Florida Artists Hall of Fame.