ZenDog Productions is the producer of Real Fake: The Art, Life & Crimes of Elmyr de Hory.

Walk into any of the world’s museums or art auction houses, and you have good reason to doubt your own eyes. Is that Picasso real? Did Modigliani really paint that masterpiece? The answer may be no! These works could very well be the hand of one of history’s most versatile and prolific art forger— Elmyr de Hory.

40-years after Elmyr’s death, filmmaker Jeff Oppenheim embarks on a re-examination of the facts of the case. A team of investigators dig into the life, art and crimes of this enigmatic forger while a cadre of art experts discuss the issue of forgery and theft within the art market at large.

Assuming all previous information known about this forger might be as “wrong” as his art, the team investigates the provenance, forensics and connoisseurship of Elmyr de Hory. Together they cut through a myriad of aliases, searching never-before-utilized archival records, police files and personal remembrances of those that knew him.

In the center of it all is a breathtaking trail of evidence—a trove of original impressionist and post impressionist masterpieces, estimated to number in the thousands, and potentially now worth billions.

Oddly enough, forty years later, we are no further along in ferreting out the fraudulent works by Elmyr, the criminal charges brought against him and his associates in 1976.

In fact, in order to escape the impending trial in Paris, Elmyr took his own life in Ibiza, Spain. His associate LeGros, who served as his primary sales agent, clung to a sanity defense while flooding the European legal system with counter law suits and accusations. And, the slow but eventual dissolution of the case enabled the art world to seemingly escape further embarrassment, or worse blame. 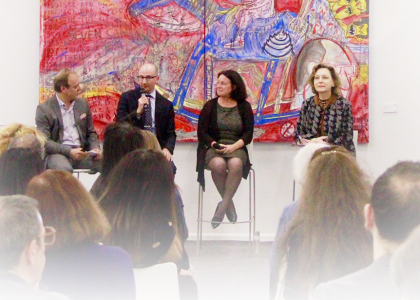