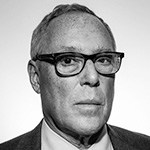 Asher Barry Edelman (born November 26, 1939) is an American financier. He began his career on Wall Street in 1961. In 1969 he formed Mack, Bushnell and Edelman where he was CEO.[1] Edelman’s Wall Street businesses included investment banking, money management, and derivatives trading. In 1988, he taught a course called “Corporate Raiding – The Art of War” at Columbia Business School, using as his textbook Sun Tzu’s The Art of War.[2] In 1988, he moved to Switzerland and founded a contemporary art museum in Pully, near Lausanne. The FAE Musée d’Art Contemporain launched the first European retrospective exhibitions of Robert Mapplethorpe, Jean-Michel Basquiat, Roy Lichtenstein, and Peter Halley. It also was the first venue for “Post Human” an exhibition co-curated by Chantal Prod’hom of the FAE and Jeffrey Deitch.[3] In 2002, he created the company Edelman Arts Inc, a dealer in Impressionism through Post War art, which also represents contemporary artists including Doug Argue,Yasmine Chatila, Cathy McClure and Christopher Winter.[4] Edelman is the founder and president of ArtAssure Ltd., an art finance firm founded in 2010,[5] which places art at auction, lends, purchases and guarantees the price of art at auction. In 2014, he launched Artemus, an art leasing business. Artemus buys art from owners and then leases it back, typically for seven years. The other shareholders in Artemus are the Durst Corporation and Armory Merchant Holdings.[6] Edelman has served on many Boards of Trustees of art and educational institutions including past Chairman of the Board of Brooklyn Academy of Music, Vice Chairman of American Ballet Theatre, Vice Chairman of the Alvin Ailey Dance Theater, Chairman of the Karole Armitage Dance Group, board member of the Prix de Lausanne,Gotham Chamber Opera, and many others. He presently serves on the boards of The Studio School and Bard College.