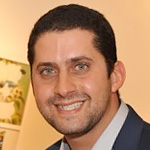 Leon Benrimon, Heritage Auctions’ Director of Modern and Contemporary Art for its New York office, has spent his entire life in the art business, with parents who both own art galleries, and three siblings, all of whom also currently work in the art world. Prior to joining Heritage, Benrimon owned Benrimon Contemporary in New York, where he sold blue chip artworks on the secondary market in association with historical exhibitions, while dedicating himself to representing and supporting emerging, established and mid-career Contemporary artists working in a variety of mediums. He received his Master’s Degree at Christie’s Education in New York and worked at family owned galleries on Fifth and Madison Avenues at David Benrimon Fine Art. His specialty is working with new collectors and post-war artists – such as Warhol, Lichtenstein, Prince, Basquiat, Longo, Kusama Haring, Murakami and Hirst, among others.