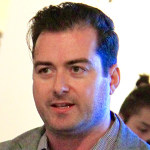 Richard Sarrach is a Principal and co-founder of form-ula; a multidisciplinary design/research practice that seeks to understand the intersection of design, engineering and its collaborative possibilities to produce high performance architecture for large and small scale projects. Form-ula was selected to represent the United States as part of a collection of young architects from 57 nations that is included in the BACKSTAGE ARCHITECTURE publication during the La Biennale di Venezia in 2012. Form-ula was also awarded the AIA 2014 New Practices Award, the Architectural League Prize for Young Architects and Designers in 2011 and the AIA Innovative Curtain Wall Design Award in 2010 for F.A.T. (Fluent Adipose Tectonic). Richard specializes in computation techniques, digital material practices and the ramification that they have on culture. He was named as one of Pratt Institute’s 40 under 40 alumni and lectured at TEDX Youth San Diego in 2012 on the future of our built world and was recently awarded a MacDowell Fellowship to conduct research on the culture of the copy, entropy and 3d printing. He has taught at Parsons School of Design, Rensselaer Polytechnic Institute, City College of New York and Columbia University. He is currently the Director of the Digital Futures Group and an Adjunct Professor in the Pratt Institute Undergraduate School of Architecture where he has taught design studios in China, Vietnam, Cambodia, Rome and The United States that have been published and exhibited internationally. He is actively engaged in research on robotics and the history of making as a pedagogy as well as the intersection between fabrication and economic agents.